Born and raised in Georgia, Keith Gibson is a U.S. Air Force Sergeant who began his military career as a combat communications operator at Robins Air Force Base. Sergeant Gibson entered the Stargate Program as a guard stationed at Area 37 in Nevada, for the still under-construction Prometheus. When rogue NID members hijacked the Prometheus, Gibson was rendered unconscious by the very civilian camera crew he had been assigned to monitor. When SG-1 and the Asgard retook the Prometheus, the Asgard beamed Gibson and the other non-essential personnel back to Stargate Command.

After that incident, Gibson was reassigned to the newly-established offworld Phoenix Site. Sergeant Gibson takes this to be meant as a punishment. He wasn't good enough to help SG-1 on their mission for the Asgard, and now he's not good enough to even be posted with Human operatives. 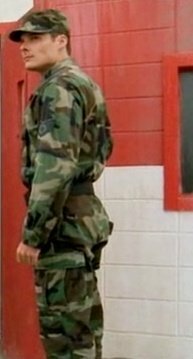