Biome: Artificial: Wisdom +1; Life or Death Repairs: You gain Advantage on engineering checks made when failure would deal damage or endanger your life (such as repairing an airlock before it fails or diffusing a bomb).

At the proper age of implantation, the Age of Prata, was implanted with his symbiote and separated from his family.

Jal'rool served Apophis well, aboard Apophis' flagship Ha'tak. But when a Tok'ra spy almost took out Apophis with a bomb, but Jal'rool's quick hands saved Apophis. But, Apophis was not a generous mood and reprimanded everyone involved, by sending them to far off remote outpost on one of Apophis mostly tundra-like planet. Where he honed his Scout abilities.

He was seduced to serving Hathor, when she reemerged after being trapped on Earth in stasis, and almost took over SGC, then escaped. Afterwards, she plotted, schemed, and her favorite tactic, seduced, to build back her empire. Hathor found Jal'rool on the remote outpost, apparently forgottened by Apophis, and so, he was easily courted by Hathor to join her cause. She made him one of her Honor Guards, which are her personal bodyguards and companions. And, to make her Honor Guards stand out, their armor highlighted in red, as well as their Ma'toks lens within the staff, thus giving them red glow.

But, that all didn't last long as one of her schemes to trick SG-1 into divulging what intelligence they knew, but Col. Jack O'Neill caught on and when was the given the opportunity killed her in a cryogenic tank. 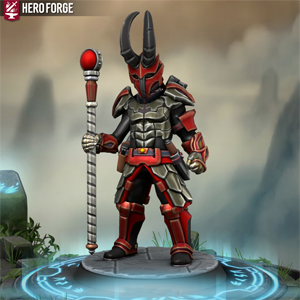