My homebrew setting history, for those who would rather run Stargate RPG in the present day. 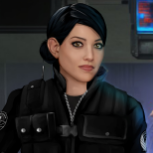 By Aisynia,
April 3 in Homebrew